all links are to non ravelry sources unless stated otherwise. 2020 Was the year of being in our own spaces, a lot. It was also the year I fully worked from home and realised how much stuff I had acquired from owning fluph and how little storage space it have. which then leads onto how much stash I have and how much I love it all and really would like to use it. So i decided the best way to do this would be to keep spreadsheets on what i brought in via what i used. Totally normal right. Right?!

These spreadsheets were meticulous, I weight every single thing that was in my stash, i weighed everything i brought into the stash and everything i used/gave away. So I started off 2020 with 40047grams of yarn. Wait, what! That’s over 40kg. yikes. I would love to know the yardage of this but that’s a huge project for another day. Well, let’s start weight wise. I purchased 4407 grams of yarn. So 4kg, that’s not so bad. A good chunk of that was made up of Rusty Ferret yarn I used for samples (around 1568g), Another big volume was yarn for my new nieces baby blanket. (1243g). Because we couldn’t have a new family member coming into the world without something hand knit. That would be a disgrace. The rest of the yarn that floated its way into my house was from acquired yarn, like swaps for my mitred square blanket. A BEAUTIFUL skein of fab funky fibres in the trolls world tour colourway for my birthday and purchases from operation social justice warrior. I'm not going to lie. I'm really happy with this number, with space being at a premium in the flat since i closed fluph, I am trying so hard to not acquire more stuff until I remove some stuff and the lack of adding to the stash is great. OK the important bit, what did i use from the stash?

I'm a bit scared to look. OK i used 6508.48grams of yarn so over 6kg which is scarily only 2kg more than i brought in. I'm not sure how i feel about that. Considering how many yarn eating projects i did I thought it would be more. So what did i make in 2020, I'm not going to list everything as I don't want to make this post MASSIVE!

So the baby blanket, I made the bounce blanket by tin can knits, and its ADORABLE  using 283g , now didn't I just say I bought 1243g that's nearly a kilo left in my stash! WHAT THE HECK, that's so annoying. Next up in my BEAUTIFUL Roy.G.Biv cardigan by park knits. (﻿Ravelry link) This was a bit of a stash eater, well i think it was. Let me work out how much it actually used. A staggering 1604g that cardigan weighs over 1.5kg WHAT! No wonder its the snuggliest thing i own, next to Oskar. Another Stash eater was the Electric cardi,(ravelry link)  which i think I'm going to frog as i used the wrong yarn on the sleeves and its just too heavy. But shh it totally counts for 2020. Unsurprisingly it has 1391g of yarn in a really small cardigan. I really love the combos of all the greys and a little bit of rainbow in the body so i want to use the yarn like that but in something that i will be able to wear. This is no fault of the pattern, just my bad life choices and i would definitely knit another one using the recommended type of yarn. Oh  i should say the pattern is  Electricardi by disco stitch and if you google just electricardi, its my face that appears alongside some Pokémon. GOALS. 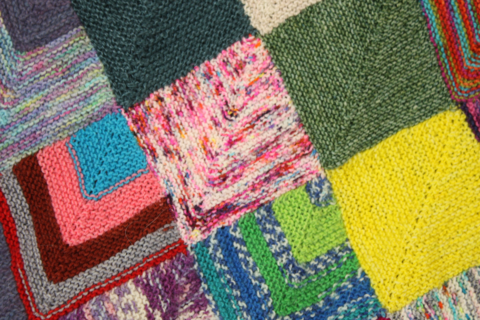 I also used a chunk on my mitred square blanket, which comes in at 153.48g I have literally been knitting this since about 2017 and its only half done and i love it but at the same time i am a bit over it. Anyone else get that feeling?

The rest of the projects were fairly small, like a pair of socks, some WIPS, the cosiest cowl XXXX Oh and giving away a stack to people for blankets and general get this out my stash purposes. I got 2701g out of my stash by panning it onto other people, HA!

Thank you for indulging me with this project of mine. I am going to continue the tradition into 2021 and lets see how much of my beautiful stash I can get into the world and out of the dark cupboard.